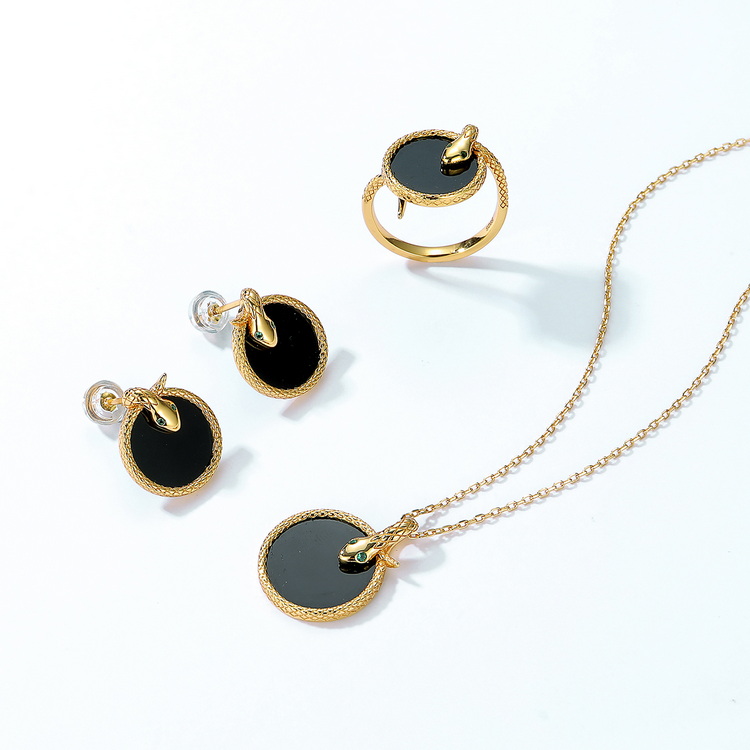 It is not easy to fade, easier to be worn and match clothes. Suitable for Party/Daily Wear/Gift.

Maintenance:warmly remind you to keep away from water,chemicals ,sharp objects ,and take off the jewelry during you are sleeping.

This set of jewelry is designed with snakes and inlaid with black agate; black agate is a symbol of longevity, which can promote a happy and prosperous life and bring good luck; at the same time, it integrates the essence of ancient Roman mythology, and especially integrates the snake totem into the design of the jewelry. Presenting exquisite Jaylen's artistic masterpiece, the snake shape is often used as an element of jewelry and decoration. Through the shedding of the snake's skin, it symbolizes continuous transformation. Combined with black agate, it means eternal youth and eternal life.

Since ancient Roman times, the serpent has been synonymous with the mystical and sacred in legends and has been regarded as the embodiment of immortality, power and charm. In the ultimate temptation of the snake, the snake-shaped jewelry exudes infinite wisdom and strength, showing the free and vivid agility.

In ancient Egypt, the snake was an animal representing kingship. The crown of the head of all the images of the pharaohs seen is very special. This is a kind of decoration similar to the flat neck erected when the cobra is under attack. Pharaoh's staff always had a snake entangled in it, because in Egypt, the snake symbolized Solomon's wisdom, and the cobra god was the protector of the ancient Egyptian monarchs.